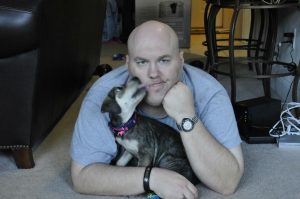 We’d like to invite Greg as a good example of “you’re doing it wrong” for the rest of our attendees. He originally joined the voice acting ranks through his background in IT and Engineering (no, seriously).  Earning advanced degrees from Pennsylvania State University and studying drama with the Walnut St. Theatre, the Wilma Theatre, and the People’s Improv Theatre. His agent told him that he had a face for radio, and he’s been a cautionary tale of “how not to be a voice actor” ever since.

Greg has been performing behind the mic for over 18 years providing vocal talent for companies such as AstraZenica, American Express,  Banfield Pet Hospitals, DuPont, Lockheed Martin, CBS, Honda of America, Virgin Mobile, PetSmart, the MBA, the NBA, and anyone else foolish enough to let him near their VO copy. In the anime world, he’s had the privilege to be cannon fodder for titles such as “Evangelion”, “Ikki Tousen”, “One Piece”, “Shiki”, and “Tales of Vesperia”.  For some people “Soldier A” is an initial role, but since Greg lives in Philadelphia, it’s become a way of life.

To learn more about Greg, visit www.gregoryhouser.com or @ghouser on Twitter. We think FaceBook may have a restraining order… (he’s actually on there as well).