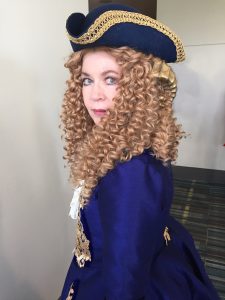 @SewistSeams (aka Kristen) has been sewing for over 50 years and has been active in costuming since high school.  Kristen was introduced to cosplay in 2007 when she costumed her daughter and a friend as Avatar characters to attend an anime convention.  A decade later, Kristen’s now adult daughter @katieandcatblog urged her mother to give cosplay a try herself.  Kristen’s first cosplay was as the fairy godmother to her daughter’s Cinderella.  Since then Kristen and Katie have specialized in giving their costumes a historically accurate spin.  The duo won Best of Class (Masters Group), then Best of Show at Galaxycon Raleigh 2018-2019.  Kristen enjoys sharing her costuming and historical expertise to help others improve their skills and wants to encourage broader cosplay participation across generations.