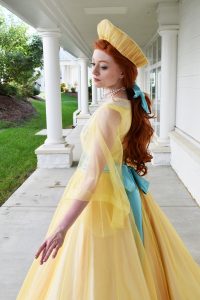 Katie of @KatieandCatblog is just a girl with a cat (and a blog). She has always loved costumes and playing dress up (something she got to indulge in professionally while working as a performer at Walt Disney World), but it wasn’t until 2016 that she started learning how to sew costumes for herself. Since then Katie has completed dozens of cosplays, become an active member of the charity cosplay group Causeplay Carolinas, won Best in Show at Galaxycon Raleigh 2019 with her mother Sewistseams, made a brief appearance in “Into the Unknown: the Making of Frozen II” wearing her live action Cinderella cosplay, accidentally stabbed herself with many sewing needles, and generally had a blast exploring the world of cosplay.